Welcome, and thank you for your visit. 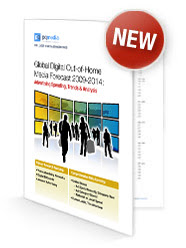 Amid a sharp downturn in global advertising spending and a decline in traditional out-of-home advertising in 2009, digital out-of-home media is among the fastest growing media in the world and will continue on an upward track in 2010, according to a new global forecast from PQ Media, the leading provider of media econometrics.
Throughout history, emerging media supported by strong audience metrics have consistently grown during economic recoveries after deep recessions. This was true for radio in the '30s and '40s, broadcast TV in the '50s, cable TV in the '80s and '90s, and Internet and search in the '00s. PQ Media data strongly suggest history will repeat itself in the case of digital out-of-home media, due in part to today's unprecedented media disruption and fragmentation, people consuming more media out of the home all day long, and with media stakeholders placing greater emphasis on audience measurement.

Read more detailed information on this report...
While the rate of growth has gone through a "gold rush" and a PQ Media predicted "shakeout" phase, with decelerated growth for the second consecutive year, the report anticipates U.S. spending will grow 2.0% to $2,469 billion in 2009, with worldwide spending up 4.7% to $6.69 billion. Starting in 2010, PQ Media forecasts digital OOH will move into a "breakout" phase and grow at a compound annual rate of 9.4% through 2014 in the U.S. and 10.1% globally. During the forecast period, many video advertising network and digital billboard sub-segments are anticipated to see double-digit growth in spending.
The digital OOH media sector was first identified and defined by PQ Media in 2007. The PQ Media Global Digital Out-of-Home Media Forecast 2009-2014 is the most comprehensive and respected source of strategic intelligence used by leading digital OOH operators, financial companies, brands and agencies, due to its breadth and depth of data and analysis.

The much anticipated 2009 edition covers 15 countries in the Americas, Eastern Europe/Middle East/Africa and Asia/Pacific; has been expanded to reflect input from more than 650 digital OOH companies; presents exclusive findings and predictive analysis and runs 185 pages with more than 30 data tables & charts, as well as the largest collection of digital OOH company profiles with contact information ever assembled. Detailed drill-down segment and sub-segment data from PQ Media's deep repository of proprietary spending and media usage databases provide media stakeholders with the essential planning tools for developing sound strategic initiatives in an evolving digital OOH media space.


Exclusive History, Spending, Trends and Analysis Available No Place Else:

all right belongs to

When Online we can chat live

How to start building your brand online before your business?Join me on Facebook